Monotheism (Tawhid) is the most fundamental concept in Islam. So, it seems obligatory to acquire knowledge on Tawhid from its reliable and valid sources. It goes without saying that the Holy Prophet (PBUH), His companions (May Allah be pleased with them) and Ahl-e-Bayt-e-Athar (A.S.) are the principal sources for authentic teachings on Tawhid. In this regard, two articles are included in the publicationof  52nd issue of the quarterly ‘Noor-e-Marfat’, extracted from the teachings of Imam Reza (A.S.). "The Monotheistic Teachings of Islam" and "Principles of Debate with the Followers of Religions & Sects" are the articles that quench the thirst of the seekers of Monotheistic teachings and propose the principals of debate with the followers of various religions and sects. "A Look at the Administrative Principles & Policies of Hazrat Ali (A.S.)", is another article that describes the excellent principles and policies of an Islamic statehood. The fourth article represents a research based review of the doctrinal challenges involved in the establishment of the Qur'anic ideal society. This article is published in the hope of guiding a collective sense of reform among its readers.

The fifth and sixth articles are entitled as "The Initial Bases of Islam in Subcontinent" and "Historical and Analytical Review of the Battle of Banu Qurayzah". The seventh and eighth articles are related to Urdu poetry and literature. Two articles have been published about Hali and Baba Bulleh Shah's poetry taking into account the aspect of social reform and humanization.The ninth article is entitled as "The Challenges for Preaching at Mecca, it’s Forms in Present Era and its Solution in the light of the Prophetic Style" reviews the practice of the Holy Prophet (PBUH) and the impediments He came across during preaching of Islam. This article suggests the methodology for confronting the same challenges in the present age.

The tenth article of this issue entitled as “The Relationship of Social Behavior with Suicidal Ideation” seeks to find the psychological causes of suicide and its subsequent move towards suicide attacks. Regarding the solution of the economic challenges for our country, the eleventh article of the current issue is entitled with: “Values and Wellbeing in Pakistan.” I hope the current issue of the scholarly research journal "Quarterly Noor-e-Marfat" will be well received in the academic circles and will suggest practical steps towards resolving our religious and social problems. 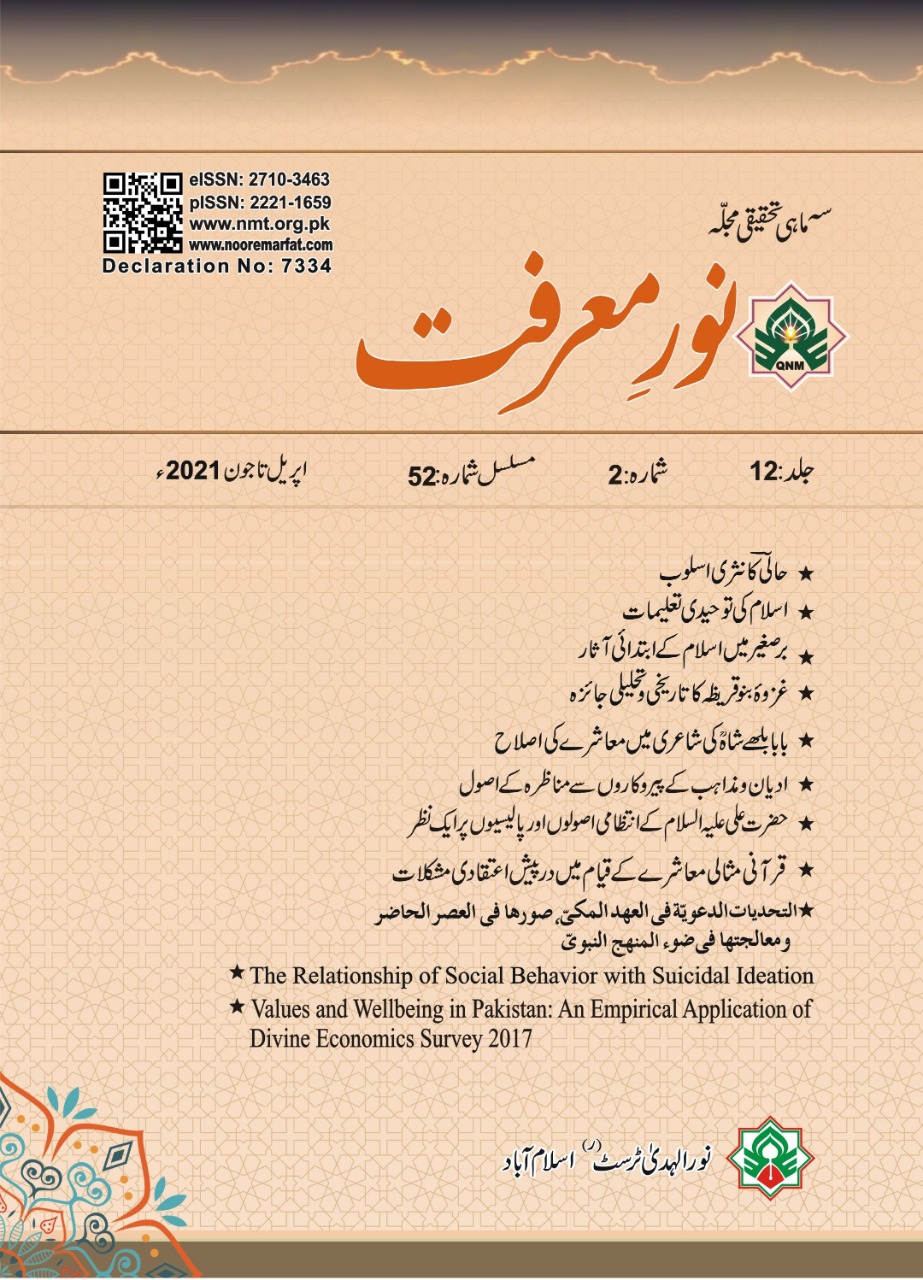